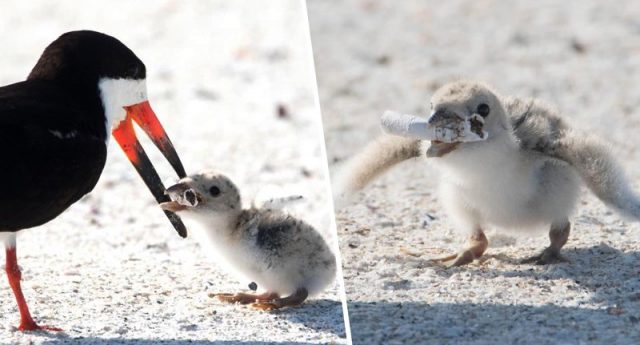 A wildlife photographer has captured a heartbreaking picture of a black skimmer bird feeding its chick a cigarette filter on a beach in Florida, USA.

In a Facebook post, Karen Mason, who took the photos, said she had stumbled upon the pair on St Pete beach outside Tampa last week.

She urged: “If you smoke, please don’t leave your butts behind.”

The images of the tiny chick holding a cigarette in its beak have riled wildlife enthusiasts around the world, and Florida residents are now calling for a crackdown on littering.

The UK’s Royal Society for the Protection of Birds (RSPB) have described the picture as “heartbreaking”, saying nature is struggling to adapt to human littering.

The photographer didn’t even know it was a cigarette butt at first.

“I happened to see an adult giving a chick something,” she said. “I knew it wasn’t a fish, but I couldn’t tell what it was.”

She only found out after she got home, and there is no telling what the bird did with the cigarette or what the cigarette did to the little chick afterwards.

“I put it on the computer and I blew it up and I saw it was a cigarette butt,”

Birds can mistake the filters for food and feed them to their young.

Ms Mason also captured another picture of the chick carrying the filter in its beak:

Birds have been captured carrying all sorts of objects – that people litter – and trying to feed on them themselves or give them to their young.

“Many birds are curious about the things we casually discard and will often investigate to try and find out if something is food or not,”

a spokesman for the Royal Society for the Protection of Birds (RSPB) told the BBC.

“Sadly, this parent has decided the cigarette butt is something to feed its chick.

“Nature is struggling to adapt to the things we are doing to our planet; every year, we see more animals trapped, injured or killed by man-made products. We are even seeing litter being used as nesting material.”

“Unfortunately for many people, littering seems harmless, at worst it makes an area look untidy; however, heartbreaking images like [these] reveal the true impact of littering on our wildlife.”

Cigarette filters are usually made of plastic fibres (cellulose acetate) and take years to break down in the environment.

They are the most common item of rubbish collected from beaches globally, according to conservationists.