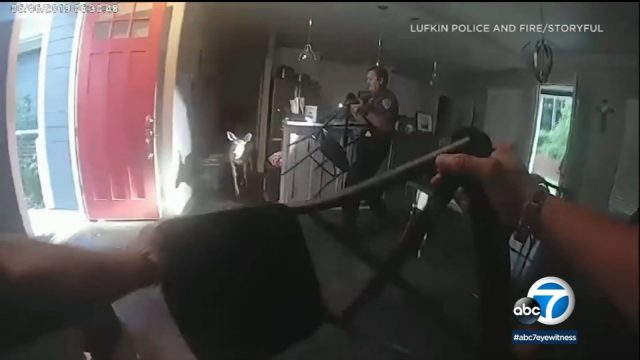 Police in eastern Texas, USA surrounded a house early Thursday after the homeowner called 911 reporting a burglary in progress.

The homeowner called Lufkin police after she heard glass breaking.

The woman hid in a closet and realized she had left her weapon in the kitchen.

Police arrived in just minutes and heard rustling in the house, and they called for backup fearing the thief might use the victim’s gun to fire at them.

Video posted on Facebook by the police shows officers entering the home, yelling, “Give us your hands!”

Then one of the officers sounded convinced that it was indeed a burglar at work.

“There is someone inside,” the officer wearing the bodycam is heard saying and he attempts to go around the house. “We got the house surrounded. Come on out!”

They get no response, and that is when they decide to escalate the situation.

“Okay, get it,” another officer says as they break the glass door to the kitchen. “Police. Let me see your hands.”

Tensions rise as the officers burst into the kitchen.

But as they round a corner, they come face to face with one very frightened doe.

The officers – evidently relieved from this close encounter – used chairs in the kitchen to shoo the deer out the door.

The deer leapt out happy. The officers could be heard laughing. The houseowner must have laughed herself silly too.

A happy ending for everybody.

A Date with a Gorilla Vet in the Wild