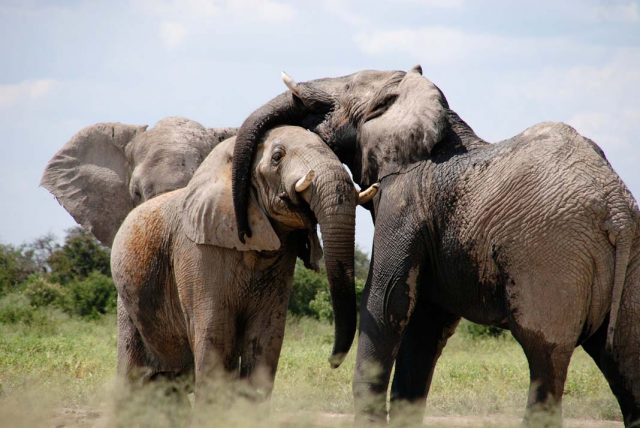 Botswana’s Parliament has adopted a controversial motion asking the Government to lift the ban on elephant hunting, citing growing conflict between humans and the animals.

The Southern Africa country’s legislators, most of them eyeing re-election in the October 2019 General Elections, say that elephants are affecting small scale farmers.

The decision has triggered an angry reaction from conservationists, who believe the move is political.

Botswana has some 130,000 elephants, the world’s largest population, and now many of them have – literally – been sentenced to death because “they destroy crops of our voters.”

This controversial decision is bound to damage the country’s international reputation for conservation and affect its revenues from tourism, their second largest source of foreign income after diamond mining.

But the president of Botswana simply doesn’t care as long as it makes a good elections pitch.

President Mokgweetsi Masisi set up a committee last June to review the ban imposed by his predecessor Ian Khama in 2014. In February, the committee recommended allowing hunting again.

“The number and high levels of human-elephant conflict and the consequent impact on livelihoods was increasing,” the Botswana Ministry of Environment, Natural Resources Conservation and Tourism said in a statement.

“Predators appear to have increased and were causing a lot of damage as they kill livestock in large numbers,” it added, saying it would ensure that the “re-instatement of hunting is done in an orderly and ethical manner”.

Surveys have shown that the elephant “range” (how far the animals travel) has been expanding. Experts say this is down to many factors, including climate change.

Elephants can be very destructive when they encroach onto farmland and move through villages destroying crops and sometimes killing people.

But it is also clear this has been induced by the increasing human settlement on animal habitat.

The animals have run out of space to go. It appears now humans are the only species allowed to multiply; the rest of the species numbers are either expected to remain constant or reduce.

Most of Botswana’s elephants live in the country’s northern region, roaming across borders into Namibia, Zambia and Zimbabwe.

The latest survey of wildlife suggests their numbers are not increasing as many rural people suspect, and conservationists are likely to say the decision aims to boost the president’s popularity among rural voters ahead of elections in October.

There are some 415,000 elephants in Africa, according to the International Union for Conservation of Nature (IUCN), with the population having been decimated largely due to poaching for ivory.

International campaigns to ban all ivory sales as a way to prevent illegal poaching have gained huge momentum but moves like this one by Botswana are likely to push conservation a few steps back.