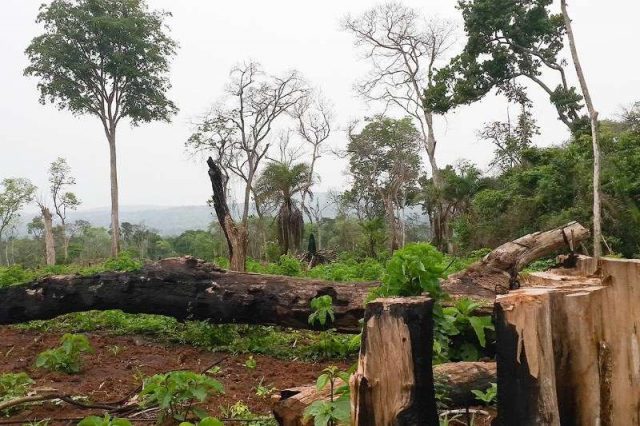 Loud thuds of trees hitting the ground. Heavy trucks running the place down. Thugs driving the trucks ferrying timber. Police hunting the thugs down. But the mafia in government protects the thugs [read themselves]. Nature is left dead.

What used to be a thick and healthy green forest here has been replaced with maize fields and banana plantations.

The smell of fresh saw dust, pigs and kilns of charcoal characterize the land on which various towering tree species once stood in this part of Kagadi district, formerly in Kibaale district.

The encroachers, who live in mud and wattle houses,have set up a trading centre they rather startlingly call Baghdad, borrowing its name from the capital city of war-ravaged Iraq.

They have set up shops and several churches around here.

Altogether, the encroaches are occupying a staggering three quarters of the 11,332 hectares of the original forest area.

The further we walked into the forest the more evident the massive plunder and destruction of Kangombe forest became to us.

There were numerous freshly cut tree stumps, logs and timber along with saw dust and felled trees.

As we set of into the jungle, we encountered an Isuzu Elf lorry loaded full of timber from the forest.

Because we were travelling with officials from the National Forestry Authority (NFA), the body mandated to manage all central forest reserves by the government, we turned around and followed thevehicle.

Soon the driver of the lorry realized that he was being followed and he, together with his cronies riding in the lorry, jumped out of the vehicle and took off on foot, abandoning it in idling mode in the middle of the dusty road. 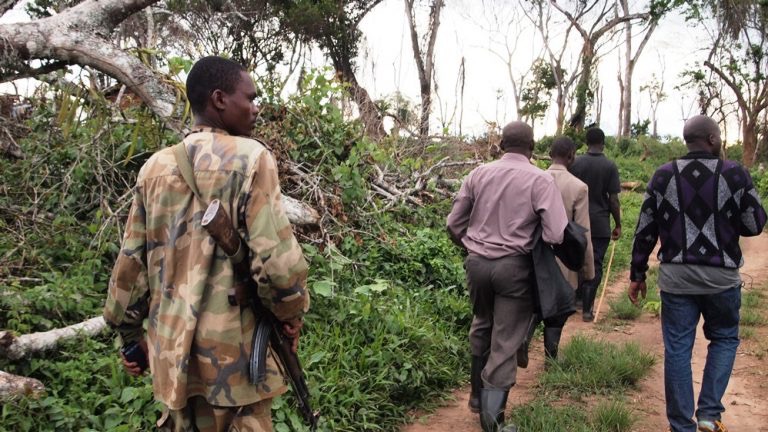 Together with armed security personnel, NFA officialsin Kagadi district then began pursuing the perpetrators but they disappeared into a wetland.

But one of them was arrested and NFA said he would help in the investigations.

The police also impounded the lorry and the timber on it and they opened a case against the man in custody as they hunt for his partners still at large.

One thing for sure is that this won’t be an easy case for the police or NFA to crack. The illegal activities in the forest seemed quite systematic and some locals were even overheard saying that some law enforcement officials connive with the criminals.

The truck was disguised tells you everything about a well-planned crime. It was covered with a sticker bearing the names of Godfrey and Catherine.  It also had images of the US and Uganda flags and a pair of wedding rings.  Its registration plate was further hiddento appear to be transporting items from or to a wedding ceremony.

It’s clear that Kangombe Central Forest Reserve is on the verge of extinction due to illegal tree cuttingleading to deforestation.

More than 1,000 pieces of freshly cut timber worth 12 million Uganda shillings were impounded from deep inside the forest and three more illegal timber cutters arrested.

The central Forest reserve was gazette in 1932 by the government of Uganda.

But the national Forestry Authority Kagadi Sector Manager Uziah Ndyanabo says only 20 percent of the 11,331-hectare area of the reserve forest remains intact.

The impounded timber belonged to an illegal timberdealer, identified by witnesses as a one VernaciousKarija. Karija is said to be plundering the forest with impunity.

“Vernacious has been cutting trees in the forest for 23 years now because he is protected by some individuals within the government,” said Mr Ndyanabo. “When you arrest him, he contacts them [government officials].  One call is made and he is out of prison.”

Verna, as he is popularly known, pays people to help him carry the timber from the forest.

He ferries people from as far as Rwanda and Kabale in South Western Uganda.  These people eventually remain behind as encroachers after serving the purposes of cutting and loading the timber.

The Kagadi sector manager blames the encroachment on some politicians.  He says they encourage people to occupy the forest land.  Coupled with this is the lack of political will to fight the habit to save the natural resources.

According to Ndyanabo, the forest was intact by 2015 but encroachment began after the elections.

“During the 2016 elections, people were promised heaven on earth by MPs who also doubled as ministers, namely Mattia Kasaija.  Encroaches invaded the forest.  Kangombe is going while we are all seeing and the politicians fear to speak against encroachment because it was their election promise,” Ndyanabo added.

This forest is a water catchment area for River Muzizi, which the government plans to harness to generate hydro power electricity to supply the western region.

However, this might not be feasible as encroachers and illegal timber dealers massively fell down the trees andburn the vegetation in the forest.

With the fast rate at which the forest is being depleted, tourism in the area is also being affected as wild animals are either killed by the timber cutters or they succumb to the elements of a degenerate habitat.

“Encroachers are as deep as 30 kilometers from the boundary,” he said. “It’s not easy to control their activities. We need to add on manpower for effective surveillance.”

Weak laws are also frustrating the efforts of NFA in trying to save the forests from depletion.  Most of the charges brought against the culprits are bailable and only call for paltry fines.

“A fine of 30 currency points is nothing to them.  They pay and go back to the forests,” Ndyanabo said. “You can’t stop a criminal activity where the profits outweigh the penalty.”

Ndyanabo says parliament should sit and amend laws to provide tougher penalties to prohibit people from abusing the forests.

Gad Benda the executive director of world voices Uganda, a local NGO based in Kagadi says impounding illegal timber is not enough.

“NFA should avoid dealing with symptoms, what we have to look at is the issue of saving the forest not impounding timber,” said Benda.

Mr. Benda also suggests the opening of the forest’s boundaries so that invaders can be evicted and the forest preserved and allowed to regenerate.

Uganda is one of the countries losing its forest cover at a very fast and alarming rate.

Forest cut down on the concentration of carbondioxide, one of the biggest contributions to climate change.

The trees trap gas produce by human beings and convert it to oxygen which is also vital for human life.

There is therefore need for proper management offorests, to protect them from plunder and in this case Kangombe forest can help to mitigate climate change.

With the invasion of this forest reserve, which is the central source of Muzizi River, there are growing fears that the water volume of Lake Albert is likely to beaffected as well as the fishing industry.

The list of dangers Uganda potentially face for forest depletion is endless.

This movie will soon turn ugly, and it will claim both its stars and villains alike unless we change its direction now.