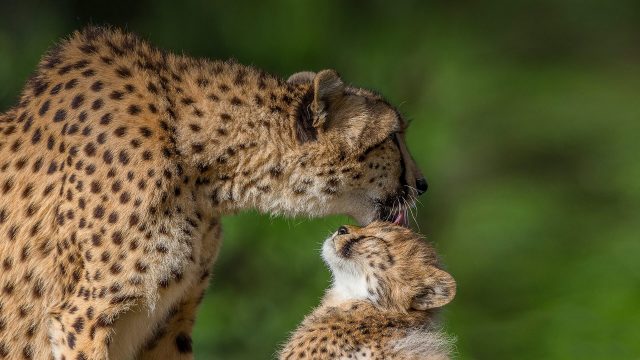 Mother’s Day is this Sunday.

Brunches, flowers, cards and gifts are in order for the most important women in our lives.

But unlike their human counterparts, mothers of the animal kingdom won’t be expecting any gifts on this special day. And yet the energy and time animal moms invest in raising their babies is unimaginable; they dothe same things that human moms do, and even more.

Rachel Buchholz, the editor in chief of National Geographic Kids magazine once said: “The job of the mom—whether you are a human or another animal—is to raise kids who can protect and feed themselves and eventually leave the nest.”

You can argue that most animals are born with instincts, but it’s often up to the mother to teach the babies how to use those instincts wisely so they can survive on their own. Easier said than done.

There are thousands of female species performing miracles to raise their young in this extremely challenging and ever-degenerating ecosystem, but today we are looking at only ten of them: 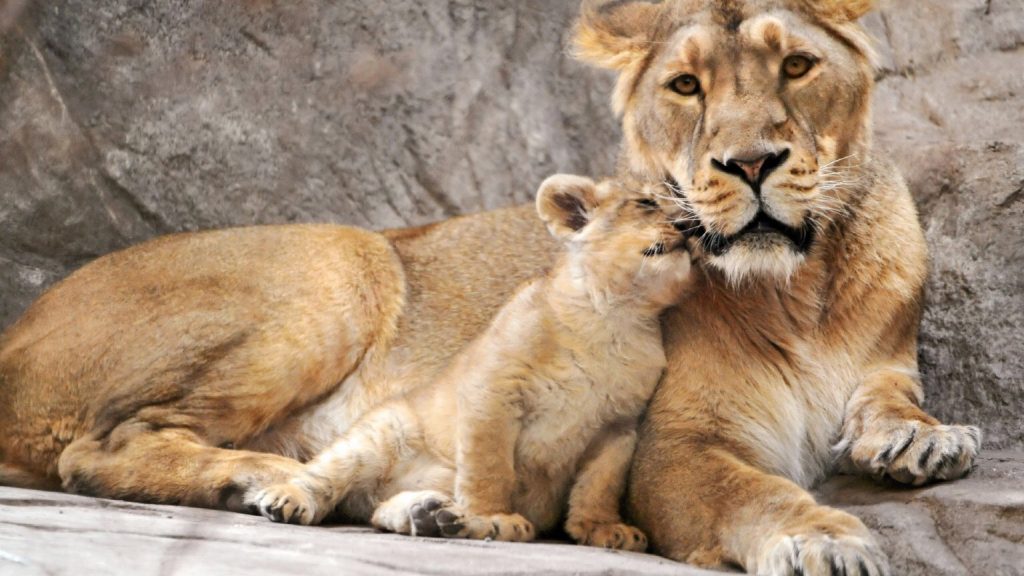 She is fittingly the Queen of the Jungle.

She gives birth to a bunch of blind and helpless cubs.

They are a toothless fluffy ball that is vulnerable to almost everything, and their mom must keep looking out for them.

In fact, the lion mom nurses the newly-born cubs and keeps them hidden from the rest of the pride for several days, as they are – well – still vulnerable to everything,including their own elder siblings, cousins, aunties and fathers.

But remember lionesses are the pride’s bread winners. They must hunt for the pride to eat. Also, as a mother, she needs to eat enough meat to produce milk for her litter.

Male lions leave the hunting job to the females, but they eat first as the mothers watch powerlessly waiting for their turn.

Patient. Caring. Selfless. Well, you can combine all those adjectives into one noun and simply call it ‘MOTHER’!

Male lions tend to kill cubs of a new pride they have taken over. With the deposed male gone, the onus is on lion mother to defend her cubs.

Some mothers die defending their cubs.

Male lions have also been known to get aggressive with females and can kill lionesses who refuse to mate.

This mother deserves a medal for being selfless and hardworking. 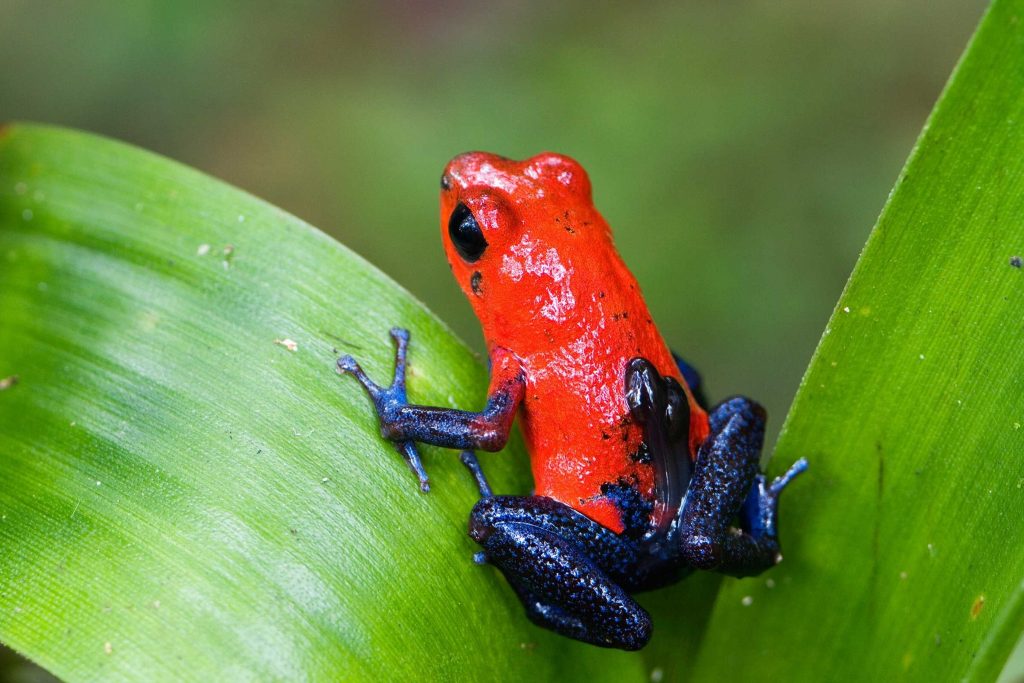 The female strawberry poison-dart frog is notable in the amphibian world for exhibiting a high degree of parental care.

Beyond her colorful skin, there is a brilliant parenting brain to this jumping mother.

After mating, the female lays three to five eggs on a leaf or bromeliad axil. After about 10 days, the eggs will hatch and the female will transport the tadpoles on her back to some water-filled location.

She carries the tadpoles to individual plants to swim around. Why does she separate them?

If she keeps them together, the tadpoles will eat each other, so she must find each tadpole its own plant. Then she must remember where each tadpole is.

Because the female will have to come back to each tadpole every few days and deposit several unfertilized food eggs. It is more like mom taking you tto a boarding school but keeps checking on you with grab and juice in tow. 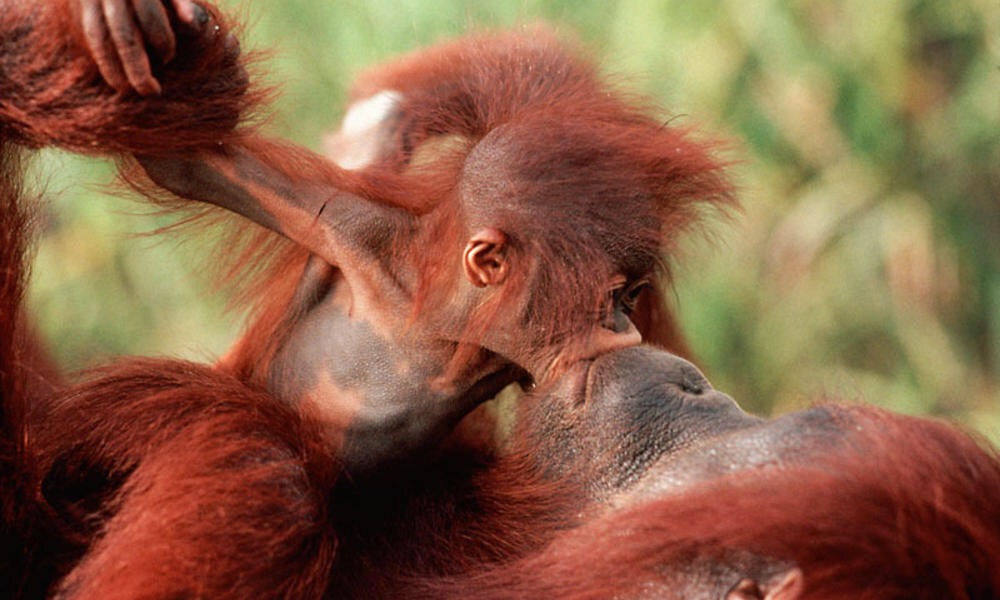 These great apes have the longest nursing dependence of any creature on earth.

During the first two years of life, the young rely entirely on their mothers for both food and transportation making the bond between mama orangutan and her young one of the strongest in nature.

The moms stay with their young for six to seven years, teaching them where to find food, what and how to eat and the technique for building a sleeping nest.

The mother builds a new nest almost every night. Throughout her lifetime, she could potentially build more than 30,000 nests.

Even as grownups and with families of their own, female orangutans are known to “visit” their mothers. That is their Mother’s Day. 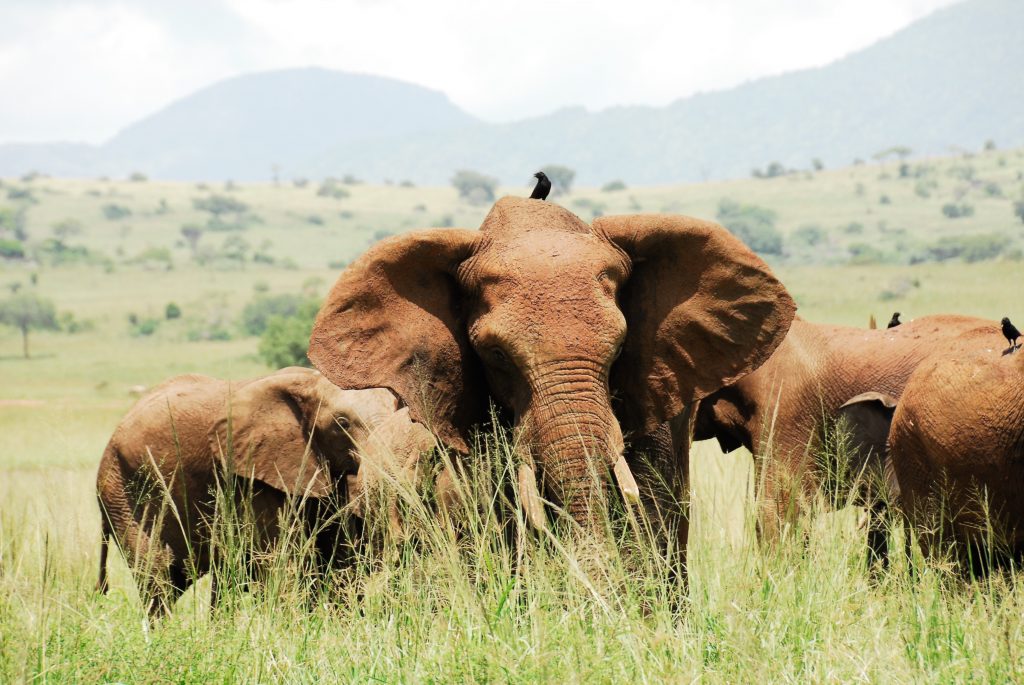 The big momma. This is one of the most protective mothers on earth. Well, what did you expect from a mother who endures two years of pregnancy?

Stay away from the elephant mother’s calf.

If you don’t, the entire herd will deal with you.

Elephants live in a matriarchal society, so other females in the social group help a calf to its feet after birth, show the baby how to nurse, and even defend the calf from any sort of attack.

The older elephants adjust the pace of the herd so the calf can keep stride. By watching the adults, the calf learns which plants to eat and how to access them. The females regularly make affectionate contact with the calf. 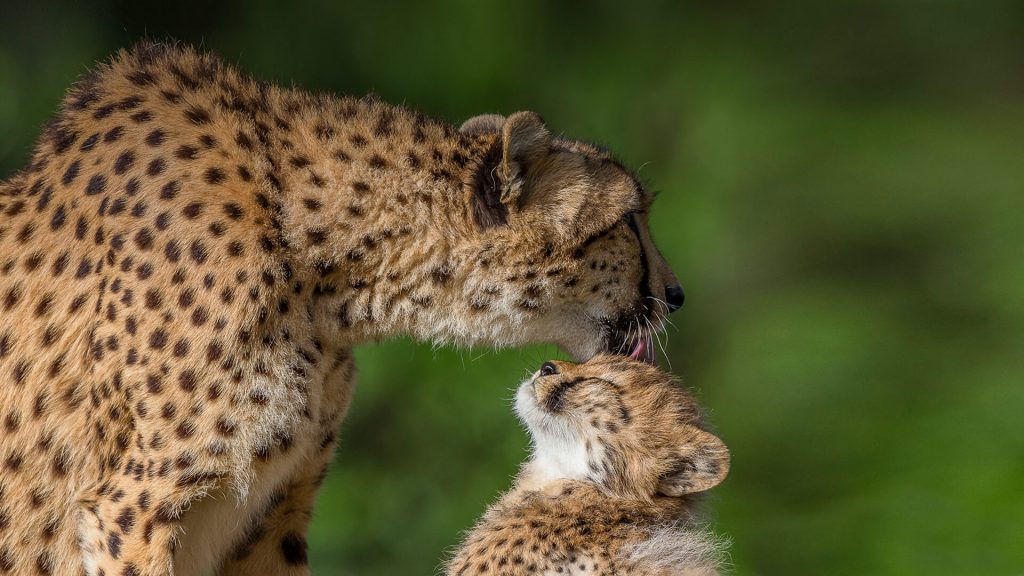 Have you seen those slim mothers who work tirelessly because they are both the mother and father?

Father cheetahs play no role at all in raising the young. Females do all the nursing and teaching the young how to hunt.

They move their litter—usually two to six cubs—every four days to prevent a build-up of smell that predators can track. Cheetahs are the lightweight of the animal predator fight club, and their weapon of choice is flight.

After 18 months of training as hunters, the cheetah cubs finally leave their mothers. The cubs then form a sibling group that will stay together for several mothers – some forever. Mother and baby may never meet again. Yeah, mama cheetahs raise their children for the world. 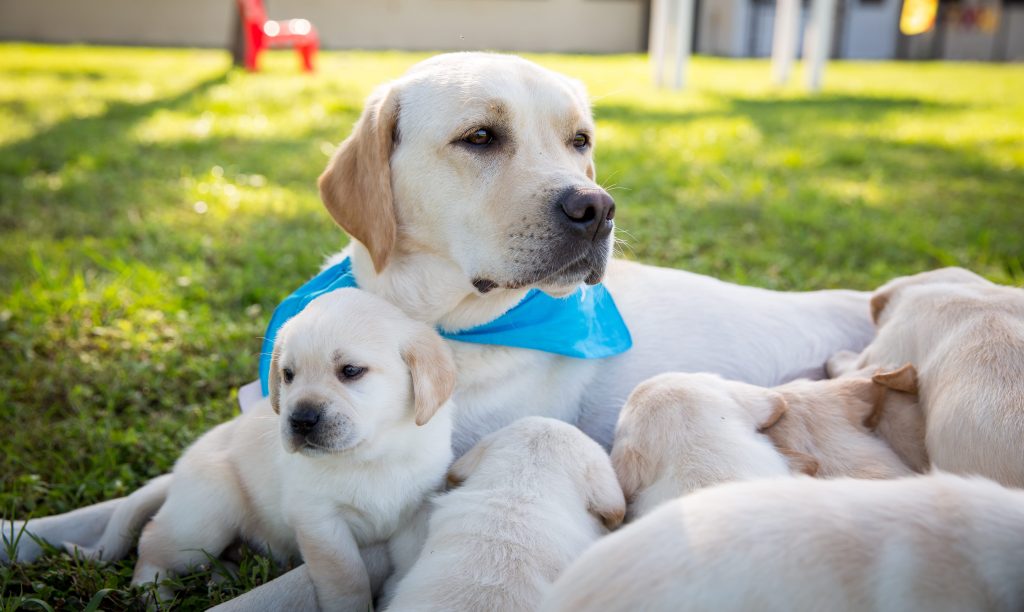 You think you love puppies? Well, mother dogs loooooooove their pups to death.

For the first three weeks after her puppies are born, the mother dog will pay undivided attention to her litter.

Even for pet dogs, the mother will pay less attention to you than is normal and may snarl at – or even attack –you if you try to interfere with her puppies.

They clean and feed their babies regularly.

When the babies are ready to taste meat, the mother dog, especially the free-roaming dogs will go get some and regurgitate it to her litter.

The pet dogs behaviour and aggression towards the owner will disappear as the pups grow older. In the dog world, the saying “children first” has a straightforward meaning.

Do you know of any mother in your village who is warm to her own babies but cold-blooded towards everybody else?

Well, she is not alone. Crocodile mothers can transform from a vicious killing machine to a sweet mother in a bat of an eye.

Females are highly protective of their nests and young, and they will spend several days on an empty stomach guarding their eggs.

When babies in the egg are ready to hatch, they signal each other and their mother with an umph, umph, umphcall.

Nicolas Mathevon, a professor of animal behavior at the University of Lyon at St.-Étienne in France, says that after they’ve hatched, baby crocs can make a sound that sends their mother running to them.

Despite having the most powerful bite in nature, she carefully gathers them in a throat pouch beneath her deadly teeth and chauffeurs them to the water.

Instinct prevents the mother crocodile from closing her bone-crashing jaws.

After introducing her hatchlings to the water, the mother croc will even feed them. The mother would then take care of her young for over a year before the next mating season.

The crocodile mom will collect her Mother’s Day Medal for being able to swing between deadly and lovely. 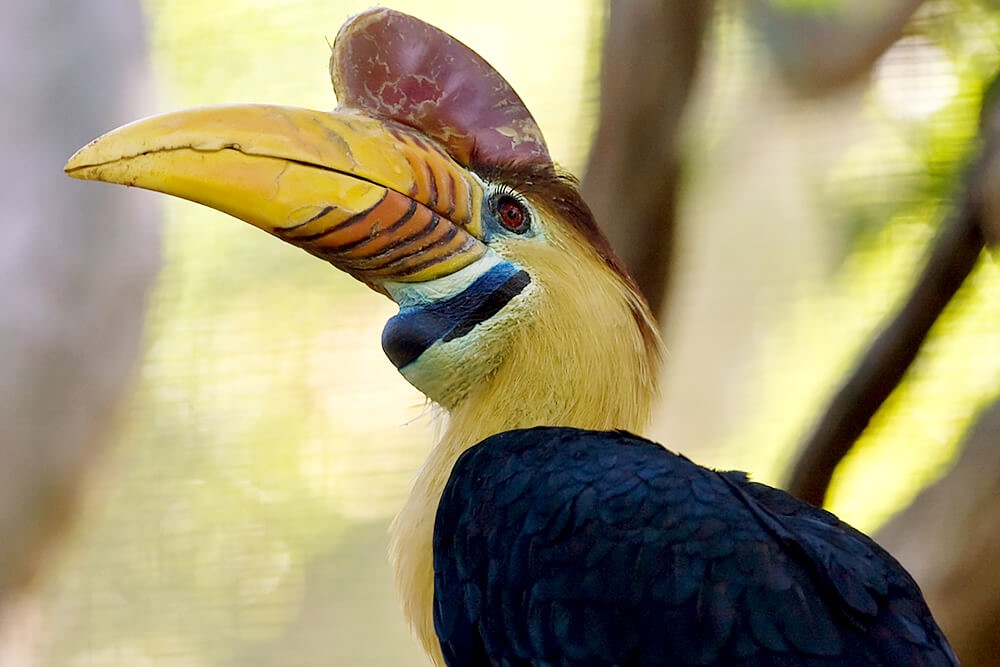 These mother birds from Indonesia exhibit a very uncommon behaviour.

The female seals itself inside a tree hole for egg-laying using its own feces.

She will stay in this rather uncomfortable house throughout the two-month incubation period. A no-fly zone for everybody except, of course, the father of her chicks.

The father red-knobbed hornbill provides food for the female and the young through a slit in the pooh seal.You need a dedicated partner to be able to do that. 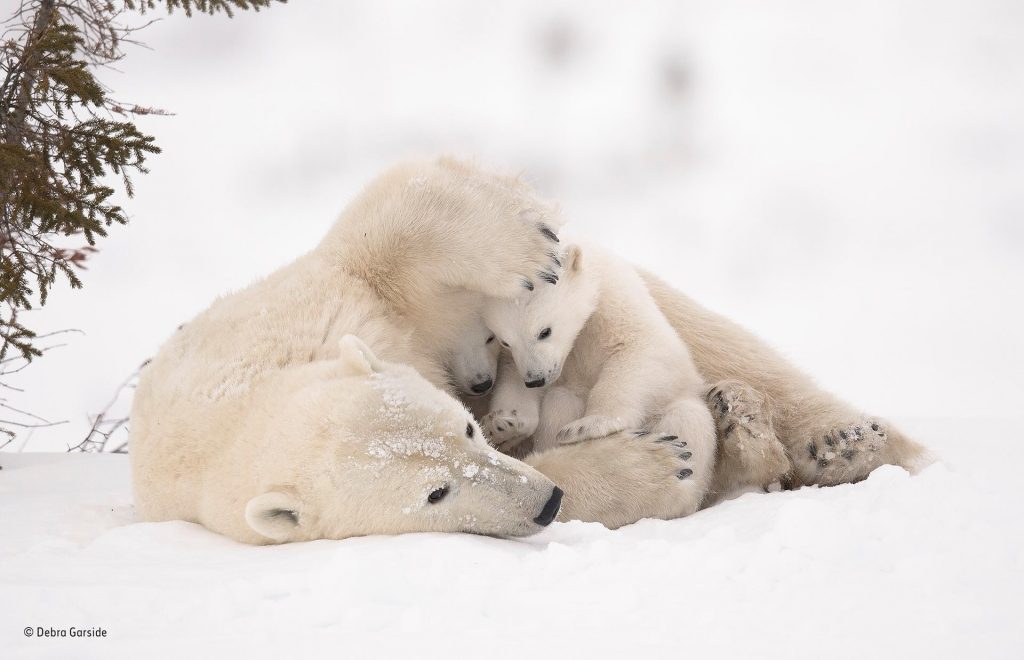 Humans call a woman, especially a mother, who is extremely protective of a child or children Mama Bear.Guess, that tells you everything you want to know about mother bears and their babies.

Like lions, mother bear gives birth to tiny, blind, downy, helpless cubs that depend entirely on their mothers for several months. They hide them in dens.

Once they do emerge from dens, mother bears are teachers and protectors.  They keep their cubs close by and ‘clack’ at them when they wander too far.  They will fight off predators – including larger male bears – and sometimes hide cubs from danger when fleeing a threat.

Mama Bear for the Mother’s Day Medal and a souvenir white t-shirt.

After they have collected their accolades and retired back in their seats, all the mother animals will stand up one last time to applaud mother octopus as she struts the red carpet to pick her own award. She can take all the time and shine she wants.

This will be her last strut.

A female octopus dies around the time their eggs hatch, and it is no accident.

After she has found a den and laid her eggs there, would-be mom octopus stays put. She won’t eat throughout the incubation period, choosing to spend her whole time caring for the eggs, cleaning them and aerating them.

She will only leave the den to defend her eggs from predators; you can say, she lives for her eggs and has no other purpose in life.

The last act of valor a mother octopus does for her young when they are ready to hatch is to blow them through her siphon and disperse them.

Imagine the excitement of blowing your eggs through the siphon, then you realise ‘this is the thing that matters to me most and it’s drifting away from me.’

When the eggs are gone, the mother octopus – who at the point is very weak – will slip out of life, and straight to animal heaven.

I say heaven because it seems like mother octopus is always looking down on her offspring from heaven.

While most mothers are celebrated for being great teachers of their young, the octomom doesn’t live to teach her brood. But somehow, even without the vertical transfer of knowledge, a baby octopus grows up to become one of the most intelligent creatures on earth.

Must be inherited from mom at birth.

21-gun salute for the Octomom!