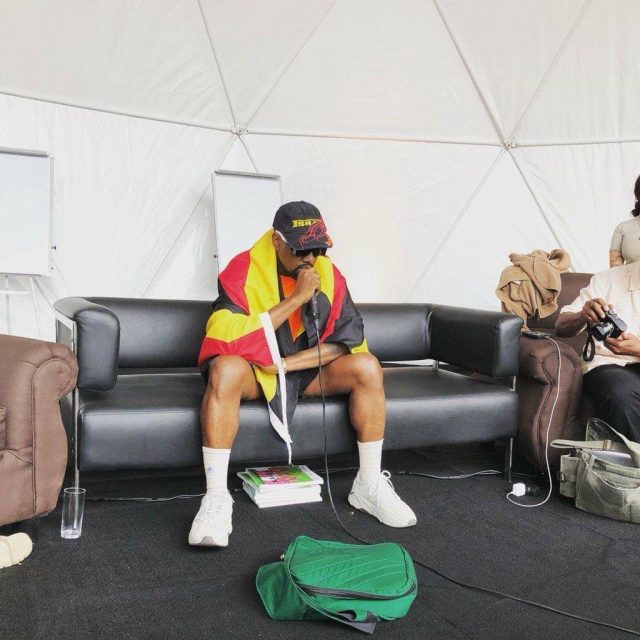 Earlier this month, Kanye West pushed back the release of his album Yandhi in order to record in Africa.

“I didn’t finish it (album),” the rapper told TMZ during a live interview, explaining that during a recent trip to his hometown Chicago he “felt this energy” and realised he needed “to go to what is known as Africa.”

He couldn’t land in a more perfect place.

Travelling with him to the country widely touted as the Pearl of Africa are his wife Kim Kardashian West and their five-year-old daughter North West, plus another hip-hop superstar Big Sean, who is here to collaborate with Kanye on the album.

Kanye told the media in the US last week that he was excited to come to Uganda.

His recent media rants could be causing a furor in the US, but Kanye West’s choice of Uganda as the true representation of Africa can’t be objected.

To put it in showbiz language that Kanye is more familiar with; Africa is the full movie and Uganda is its trailer.

His choice goes to show that Kanye and his team did good research to learn that you can actually see every bit of Africa in Uganda.

And Kanye and co. appear to have got into the groove straight after arriving in Murchison Falls National Park– north of the capital Kampala.

Pictures show Kanye playing with North then later dancing to an African song in a tent set up for outdoor recording.

Later, the trio and their entourage are seen on a game drive. They are having a great time while working. That is what nature gives you.

Chobe’s deluxe lodging combined with usually dramatic game drives and beautiful water scenery is a match made in safari heaven. And you could read delight on the faces of the American superstars, literally, as they strolled in the park that is home tosome of Africa’s iconic animals like lions, leopards, giraffes etc.

According to Mr John Ssempebwa, the deputy CEO of Uganda Tourism Board, Kanye will also shoot music videos from Uganda.

This is a big coup for the Uganda tourism industry, just as it is for Kanye and his production team. Uganda presents a plethora of material – more than enough of what they need for Yandhi.

Murchison, a gem in the Western Rift Valley escarpment can’t be missed.

“I just need to go and grab the soil… and have the mic in the open, so you can hear nature while we’re recording,” Kanye told TMZ last week.

Well, Murchison is the perfect place for this. This is where nature speaks, and in a sweet language that every music lover should appreciate.

A host of bird species and other tiny singing insects will give the perfect backup vocals. The park has over 450 bird species inclusive of Savannah species, Albertine rift endemics birds and many more.

Murchison also teems with euphorbia ranging from tiny plants to large trees that have been around for decades. It is also a gateway for the world’s longest River, Nile.

In Murchison Falls, the Nile presents a spectacle of a waterfall squeezing through a 6-metre rocky gorge to fall 43 metres which is the hardest water drop in the whole world.

During its 6,853 km (4,258 mi) journey to Mediterranean Sea through here, the river also divides the park into two distinctive vegetation zones; a tropical forest in the South and Savannah grassland in the North.

The setting alone, at a rugged natural environment with its colourful trees, rivers, mountain ranges and small valleys, is as dramatic as they come.

Put a herd of buffaloes, antelopes, gangs of mongooses, towering giraffes and the several species of snakes into the mix and you have a host of predators lining up to complete the fairytale.

Leopards are some of the top actors in this showtime piece of the natural world.

Lions hunt as they wish. You might even be lucky enough and see them greet each other telepathically before setting off for a spirited hunt for dinner.

The Nile crocodiles rule the waters here – well, not quite when you see how hippos push around every creature here.

But the biggest boss of them all is the elephant. The largest land mammal on the planet. The guide will never forget to remind you of their sheer size and the fact that the average weight of an elephant baby at birth is 260 pounds (around 120kgs) – that is more than 37 human babies. Like they say, ‘you don’t rush greatness,’ the elephant’s gestation period is 22 months – more than double a human’s.

There are so many intriguing things about Elephants and there is no better place to observe them than this park. It is one of the few parks in Africa with a population of over 500 elephants–thanks to the undivided commitment of rangers to stop them from becoming extinct.

But the stars are thankfully not stopping at Murchison.

A visit to Ngamba Island to feed the rescued chimpanzees is another on their to-do list, and they will love this one very much.

They are also set to go gorilla tracking in the Bwindi Impenetrable Forest.

For nature lovers, gorilla tracking in Bwindi is the quintennial safari trip to Africa. This will be like nothing they have seen before – oh, apart from the chilly weather there maybe.

Uganda is home to more than half of the few mountain gorillas left in the world.

This is when you hope that they can take this message back to their great friend President Donald Trump of how much wildlife protection laws need to be emphasized and reinforced.

Meanwhile, I am almost certain that they will also visit Jinja, the Source of the Nile. Come to think of it: that Kanye was once just a few miles from the source of the world’s longest river, but he couldn’t go there yet he had over a week to stay? Impossible.

But there is never enough time to tour Uganda, small as it is.

Every corner of this country is charming and special in a very distinctively unique way.

The diverse culture and nature set up can make you think that every region is a different continent.

When everything is said and done thou, the best way Kanye, Kim and Big Sean will crown their tour of Uganda to great satisfaction is of they visit some local communities. Meet the people.

The vibrant traditional dances, the organic food and the smiles will stay in their memories forever.

This is the best way Kanye will connect with his African “roots” that brought him over.

The scarcity of complete records may male genealogical studies among African-Americans incredibly difficult but when you combine Kanye West’s evident excitement to be in Uganda with the fact that there are local names like Kanyesige, Kanyehamba and Kanyerezi, you got to feel that this is his real Homecoming.

No wonder, blaring in his headphones as he landed was Homecoming a 2008 hit he did with Chris Martin of Coldplay.

(Needless to say, he looks great with that Uganda flag wrapped around him).

Wildlife enthusiasts should hope that after President Trump’s wife safari in Kenya and his friends Kanye and Kim expedition in Uganda, he can have a clear view on wildlife protection. The world and the wild in particular needs the United States as the battle to conserve our natural world intensifies with greater challenges than ever.