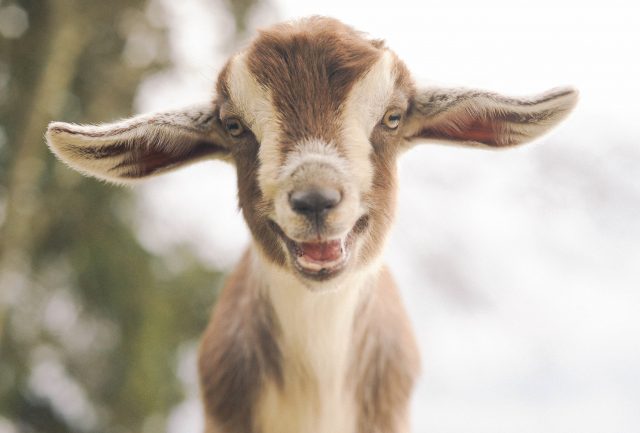 The debate over whether animals have emotions has been ongoing for decades, but now there is scientific proof that animals can at least read people’s moods.

Scientists have found that goats are drawn to humans with happy facial expressions, according to a recent study carried out at the Buttercups Sanctuary for Goats in Kent, UK.

The researchers showed goats pairs of photos of the same person; one with an angry expression, and another with a happy demeanour.

The goats made a beeline for the happy faces, the team reports in the journal Royal Society Open Science.

The result suggests a wider range of animals can read people’s moods than was previously thought.

It has always been believed that only the traditional‘human companions’ like dogs, cats and horses had the ability to tell when a person is angry or happy.

But this study implies that even animals domesticated for food production, such as goats, can also decipher human facial cues.

How It Was Conducted

Co-author Dr Alan McElligott, from Queen Mary, University of London, and colleagues set up pairs of black-and-white photos about 1.3m apart on one wall in their test area.

Then, a goat would be let loose to explore the set-up.

The researchers found that the goats strongly preferred the smiling faces, approaching the happy faces before acknowledging the angry photos.

They also spent more time examining the smiling faces with their snouts.

Joel Maganda, a livestock farmer from Mukono district – Uganda, seems to concur with the findings of the study.

“Goats have earned themselves the reputation of being stubborn animals simply because they refuse to be taken for granted,” he said. “If you pull a goat to its eating place it is going to resist even when it’s very hungry because probably it considers that to be rude – who knows! When you are gentle with these animals, they feel secure around you and you can see it with most livestock animals. It is very unfortunate that a few people understand this.”

Dr McElligott also said: “The study has important implications for how we interact with livestock and other species, because the abilities of animals to perceive human emotions might be widespread and not just limited to pets.”

Co-author Natalia Albuquerque, from the University of Sao Paulo, Brazil, said: “The study of emotion perception has already shown very complex abilities in dogs and horses. However, to date, there was no evidence that animals such as goats were capable of reading human facial expressions. Our results open new paths to understanding the emotional lives of all domestic animals.”

The study could also have implications for animal welfare, helping change perceptions of these livestock animals by highlighting their sentience.

For instance, animals that are transported from the villages in Uganda to the city for slaughter, endure agruesome path to death.

They are overcrowded onto vehicles and moved long distances on rough terrains for several hours – even days – without food, water to drink, rest, or adequate protection from the elements.

Most of these animals arrive in very bad shape, hardly able to move.

If only they could talk, probably they would be able to remind the people that pain is nonselective.

The Animals (Prevention of Cruelty) Act (Cap. 220) provides provisions for the offence of animal crueltybut you will struggle to find anybody convicted or even just arrested for this kind of offence yet there are countless accounts of animal cruelty in Uganda every day.

Uganda is one of the worst places to live as an animal.