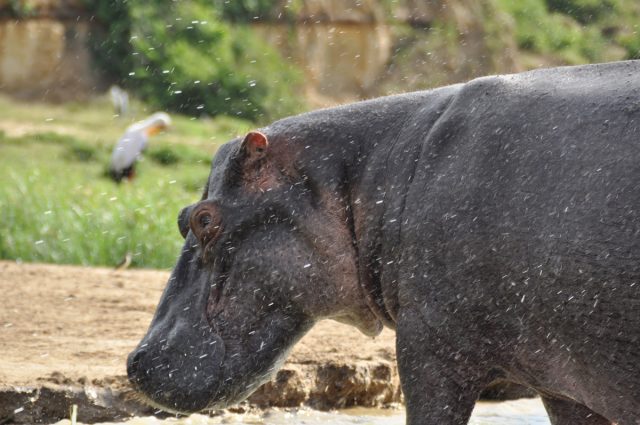 The Los Angeles Police Department (LAPD) has launched a criminal investigation after a video of a man slapping the rear of a hippopotamus at the Los Angeles Zoo circulated on social media.

Zoo officials only learnt about the incident last week, after the video started circulating on social media, and they decided to report the matter to the police.

The video shows a young black male climbing into the enclosure and then slapping the unsuspecting hippo’s backside before he jumps right back over the fence and raises his arms in the air in a gesture of victory.

The spanked hippo, named Rosie (four-years-old) seems unperturbed as she continues eating. But Rosie’s mother, Mara, who was next to her, is clearly startled as she quickly lifts her head only to see the man running off.

The woman recording the video is laughing and says: “OMG, he just slapped the hippo’s a**.” However, not everybody thought it was funny.

Mirranda Salas, who visits the zoo frequently with her two children, told the Los Angeles Times that she was dismayed to learn of the slapping episode.

“That’s upsetting that people would think that’s funny,” she said. “If I saw that I would be upset, and to have to explain why someone would do that to the kids would be hard to do. I try to teach them to follow rules.” Salas and others said they wished people had sense enough not to go into the animal enclosures.

“They obviously don’t know that hippos kill more people in Africa than any other animal,” said Glendora resident Justin Glanzman, who was visiting the zoo with his wife and their two-year-old child. “They (hippos) are sweet until you mess with their family.”

However, the LAPD is not investigating the incident as an animal cruelty case since the hippo was not injured, but instead as a trespassing case. The California state law prohibits entry into zoo enclosures, and violation of this law can be a misdemeanor or an infraction.

The zoo has since placed a warning sign near Rosie and Mara which reads: “No Trespassing”. The L.A. Zoo warns patrons of this on its map, at several zoo access points and along the zoo’s perimeter fence but the prominent “No Trespassing” sign is the first to be placed on an animal exhibit, zoo officials said.

It’s unclear what damage or stress a hippo might suffer in the wake of an incident like this, but hippos are known for their short temper. “Any unauthorized interaction with an animal is unsafe for the animal and potentially unsafe for the patron,” said April Spurlock, a zoo spokeswoman. “It is never appropriate for anyone to attempt to have contact or interaction with any animal outside of our staff-led animal experiences.”

The hippo is big, fast and moody. Just this weekend we ran a story here of a hippo that bit and killed a Chinese tourist in Kenya. The deceased and his friend, who was injured during the deadly encounter, were trying to photograph the herbivore at a resort in Naivasha, Kenya.

Hippos guard their territories with their lives.

Hippos once had a broader distribution but now live in eastern central and southern sub-Saharan Africa, where their populations are in decline.