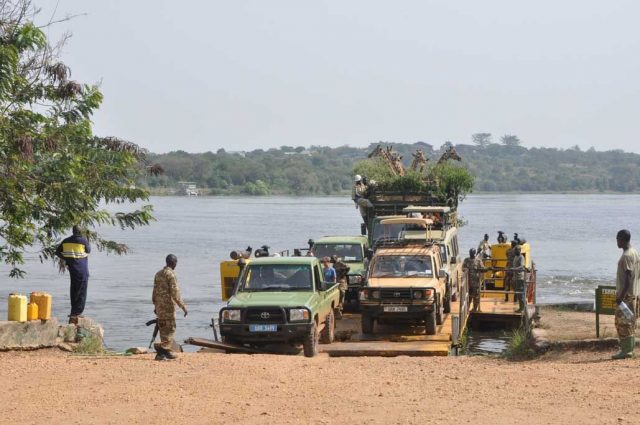 The 20-day exercise kicked off last week with a flag off at UWA offices in Kampala. The decision was reached after conservationists realised that the population of giraffes in Kidepo had stagnated at 34 for quite a long time.

On the other hand, giraffes have continued to flourish in Murchison Falls, which is Uganda’s largest game park. But with Kidepo’s international reputation soaring to the level of one of the best national parks in the world, conservationists felt the need to reinforce the giraffe numbers here.

The UWA Executive Director Mr Sam Mwandha, who flagged off the translocation team, said that this exercise is in the interest of balancing the eco-system.

Mr Julian Fennessy, the Director of GCF said that the giraffes will have as much survival chance in Kidepo as they have had in Murchison as both parks provide an abundance of giraffes’ favourite food in shape of acacia (vachellia) and combretum.

Dr Patrick Atimnedi, the Senior Manager Veterinary Services at UWA, points to human activity as another reason for the decision to spread the giraffes across several national parks of Uganda.

He calls it a ‘fall back plan’ just in case disaster befalls Murchison Falls National Park.

Dr Atimnedi may not stick out the finger firm enough into the direction of the oil explorers but he clearly hints at their activities which have affected wildlife here in one way or another.

“Oil spills could happen and the outcome could be disastrous,” he said. He adds that they are being pro-active instead of waiting to react when disaster strikes.

Oil exploration experts have promised a safe environment for the wildlife in Murchison Falls but we all know how animals in oil exploration areas have been affected across the world.

Nonetheless, conservationists in Uganda will leave no stone unturned to try and ensure the future of Murchison Falls as a ‘healthy’ game park.

In fact, more than 30 giraffes have since been translocated from the same zone of Murchison Falls to different areas over the last three years.

In 2016, 15 giraffes were moved from Murchison to Lake Mburo National Park.

in 2016. At the time, wildlife officials said that they had to move the animals due to an invasion of the Acacia Hockii, a species of acacia trees which was eating up the park and causing an imbalance in the eco-system.

Another lot of giraffes was translocated to the Southern wing of the park in 2017. The good news is that both groups settled into their new homes pretty quickly and smoothly.

Animal translocation is a complex activity. Some animals have died during the exercise while others die not long after moving for failure to adapt to their new environs.

UWA and GFC have done it twice and recorded 100% and it looks good this time around as well.

But this is not the first time, Kidepo is receiving new giraffes.

In 1999, one male and two female giraffes were airlifted from Kenya’s Nakuru National Park to Kidepo.

The giraffe numbers had dwindled drastically, from over 400 in the 1960s to 160 in 1982 before taking a nosedive in 1995 when there were only five individuals left.

Mwandha attributes the dramatic 1990s decline to poaching, during the guerilla war in northern Uganda.

In some cases, giraffes were simply killed by the people living around the park for their body parts. For instance, their skins were used to make durable sandals and their tails used in making flying whisks for chiefs.

However, this is no longer much of a threat following the immense sensitization of the communities by Uganda Wildlife Authority, according to Mwandha.

“The major threat for giraffes now is predators especially the lions,” says Dr Atimnedi. “Lions tend to favour giraffe calves over most prey because they don’t run as fast as most prey and it is a lot of meat compared to antelopes.”

It is being funded by the Giraffe Conservation Foundation (GCF).