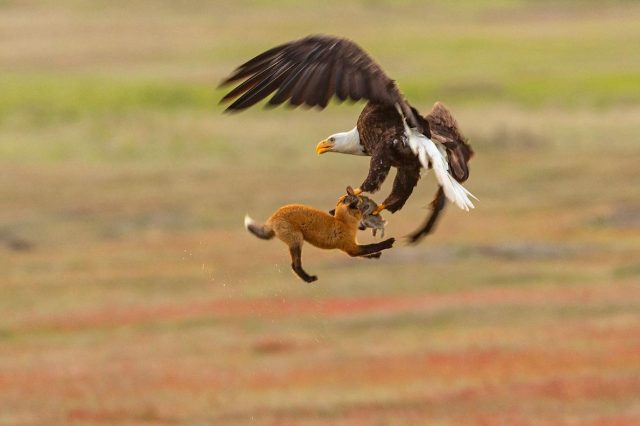 How many of you have watched the 1980 Kung Fu movie Eagle vs Silver Fox?

This is the one where human kicking-machine commonly known as Silver Fox (Hwang Jang Lee), and his ruthless gang plot to restore the heartless Manchus dominance over ordinary folks but two young fearless Kung Fu students Lee So (Gwak Mu-Seong) and Phoenix (Sarah Sit Chi-Lin) stand in their way.

Do you remember how it all went down?

Well, it may be of no importance really since this is just a movie. But a similar real-life brawl – with matching characters – went down in the wild recently and it almost broke the internet.

A fox kitten and a bald eagle faced off in Washington State’s San Juan Island National Historical Park on May 19, 2018, and it was as dramatic as they come. Let me keep you up to speed: that afternoon, a young eagle spotted a fox running with a bunny it had just captured and the bird decided to steal the pup’s meal but it didn’t go to plan – not quite.

As the fox scampered across the open field with the evidently lifeless rabbit dangling from his jaws, the eagle dive-bombed from above, swooping down, wrapped its talons around the rabbit, and lifted it into the air, fox still in tow.

It all happened in split seconds.
A rare sighting, and yet all the drama was captured by wildlife photographers Kevin Ebi and Zachary Hartje. Ebi wrote on his blog that he was surprised by the course of the entire encounter.

“A red fox caught a rabbit and was carrying it across the meadow,” Ebi wrote. “I panned my camera with it to capture the action. Then behind me, I heard the cry of a bald eagle. I turned around and saw it approaching fast. I knew it wanted the rabbit.”

As Ebi clicked for stills, his friend Hartje captured the video showing the fox trying to run away before the eagle swooped in for the steal. “I thought the eagle would scare the fox into dropping its dinner,” Ebi further wrote.

Well, the eagle too must have thought that it would easily startle the fox into dropping its meal, but it was sadly mistaken. The juvenile fox was just as bold, as it steadfastly ‘held on for dear meal.’ “Instead, the fox, with its jaw still clenched on the rabbit, inadvertently got snagged by the bald eagle,” Ebi added. “The eagle lifted the young fox and rabbit into the sky triggering an even more dramatic struggle.”

Eventually, the eagle somehow flung the fox back onto the ground. The fox must have felt disappointed after losing his dinner as night drew near but he will look back at this incident and feel positive about himself.

Firstly, he has a heart of a warrior predator – one you just can’t mess with. Secondly and more importantly, he had managed to kill the fast-running bunny by himself meaning he will have many more meals to come which is crucial to his survival in the unforgiving landscapes. As for photographer Ebi, he doesn’t believe he will that lucky with his lenses
again.

“I don’t know that I’ll ever see anything quite that dramatic again,” he said.
After the incident, Ebi went in search of the fox to see if it was injured. He found it
looking fine and unfazed.

Legit tactic or plain kleptomaniac
Dive bombing is a typical hunting tactic bald eagles employ, according to National
Geographic. It’s effective on small foxes, and on other birds. Eagles have been filmed fighting over food with other animals and it is usually caused by the eagles’ ‘kleptomaniacism’. The eagle wins most of the times.