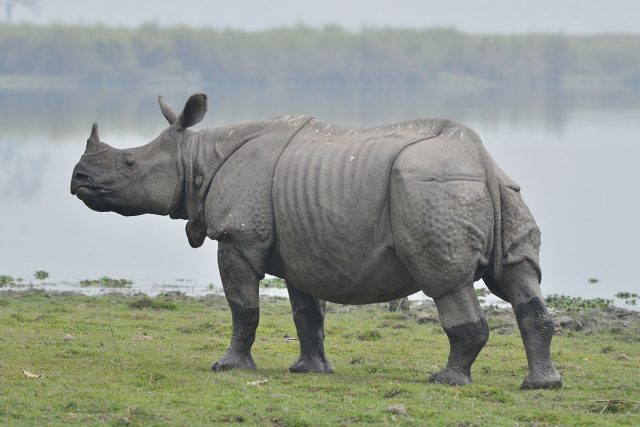 With all the atrocities that rhinoceroses have suffered at the hand of man, it is as astonishing as it’s unimaginable that they could still trust a human being around
them.

But that is exactly what is going on at Ziwa Rhino Sanctuary in Nakasongola district of Uganda. Rhinos are critically endangered because of rising demand for rhino horn from
some Asian consumers, particularly in Vietnam and China, who use them in folk remedies.

Today, there are just a handful of these giants left in the world. Nakasongola district in Uganda – Ziwa ranch in particular – is one of the few places where you can now find these rhinos.

This has been made possible thanks to a collaboration effort between the Uganda Wildlife Authority, the Rhino Fund Uganda and Ziwa Ranchers Limited who will leave no stone unturned to save rhinoceroses from extinction.

And it is working. The sanctuary, established in 1997, is now home to 22 rhinos. The sanctuary has offered a secure place for rhino populations to be expanded by breeding, protected from human and non-human predators and gradually re- introduced into Uganda’s national parks, while at the same time, allowing the public to enjoy these majestic animals, as the project moves forward.

A visit to Ziwa is as refreshing as they come.
The rhinoceros is the second largest land mammal, only second to the elephant, so there is no way you can miss its imposing presence. The best time for touring Ziwa is early morning when rhinos are active and wandering about in search for food.

A tour guide will take you through a real-life jungle book as you learn about the behaviour of these untamed beasts. Being herbivores means that you won’t see bloody action like that of lions, because the grass won’t fight back or even try to run away from the rhinos, but you can’t predict nature and when it comes to behaving naturally, rhinos are right up
there.

They are naturally badass animals. This only means one thing; please keep a  distance!
It is not advisable to wander about on the ranch like you’re on a cattle farm. Rhinoceroses have a sort of attack-first-and-ask-questions-later attitude. When a rhino catches the scent of a human or anything they deem threatening, they won’t hesitate to charge.

And because they don’t see that well, rhinos sometimes charge objects like trees and rocks, mistaking them as threats. Their charge is chilling. The attack is devastating. But they are beautiful animals too. Beautiful at heart are the mother rhinos who will defend their young with their lives.

Don’t mess with a rhino mama, and don’t even dare a male rhino because it is a worse badass who won’t let you overstep his territory. But like 2Pac sang, “even thugs gotta learn to take it easy.”

When temperatures pick up, the rhinos will retreat and take shelter under the trees. A tough animal with a soft side. One of the big five. The second largest land animal, and certainly a species that deserves a huge conservation effort.

At Ziwa:
The sanctuary is home to at least 40 mammal and reptilian species including monkeys, antelopes, hippopotamuses, crocodiles and numerous bird species. There is accommodation and culinary services too.

Entrance to Ziwa is free but if tracking the rhinos, you will be charged a modest fee. Your contribution goes into a pool used to run the sustainability of the sanctuary. You will need closed shoes, long pants, water and insect repellent.

After the tour, you can decide to help the sanctuary set up rhinoceros conservation programs by donating.

And most importantly, now that the rhinos have trusted us again, please DO NOT
BUY PRODUCTS MADE FROM RHINO HORN or its body part.