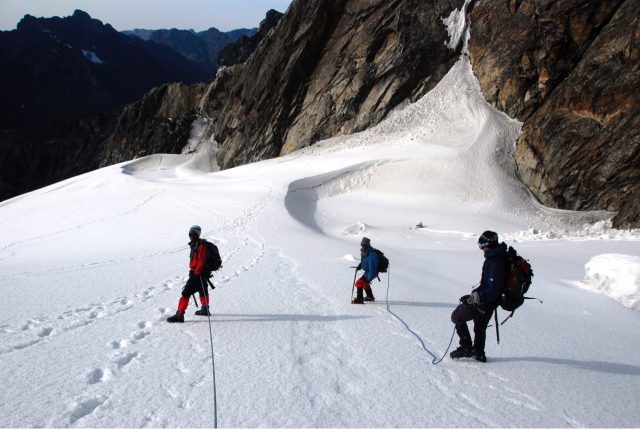 Uganda is famous for its diverse wildlife and magnificent landscapes. Mountain Rwenzori is at the heart of things linking several miles of mountain ranges with the savannah, water bodies and forestry traversing national parks through farmlands and winding past volcanoes.

Located in the Albertine Rift Valley in Western Uganda, Mt. Rwenzori is a
UNESCO World Heritage Site. This is one of the most important places in Uganda. A nature wonder. A place you must visit before your legs go or your adrenaline glands cease.

For professional mountain climbers, conquering Rwenzori is the ultimate mountaineering challenge in Africa – tougher than even the taller mountains like Kilimanjaro.

Unfortunately, very few tourists have been able to hike the Rwenzori mainly because it is generally considered an expensive destination. However, the people who manage the park are now working to make it a manageable expedition.

The latest development is a new trail which will take your breath away as you pursue the ascent to Africa’s third highest peak, Margherita Peak. Its starting point is in Kabarole District, ending at an altitude of 5,109 meters above sea level, Uganda’s highest point.

This is the kind of challenge that turns on every adrenaline junkie. “Whoever gets to this point [summit] doesn’t feel the same again,” says Mr Brett Gross, a mountain rescuer. “I mean, you go up there to pit your energy, wit, ego, technical ability and everything you got in the tank against a daunting mountain and all the things it can throw at you. After you conquer the height, then you get blown away by the beauty that lies under your feet as you stand on top of the world.”

Talking of beauty under one’s feet, Rwenzori gives you that beauty in plenty.

This place has some of the most amazing plants, birds and animals. The legendary three-horned chameleon, the Ruwenzori duiker and the shimmering Ruwenzori Turaco – all endemic to this region – reside here.

Rwenzori is also dotted with many small rivers. The snow-capped peaks of the Rwenzori is a sight made in expedition heaven. Rwenzori is one of the only three places in Africa that are snowy all year. Its vegetation varies from a tropical rain-forest with so many trees that are over 150 years (1500 – 2500 m) to an alpine vegetation with everlasting flowers and
picturesque crater lakes.

Simply put, it is such an astonishing mountain to explore. A hiking trip can cost up to $1,500 (around Shs5.5million) for a full board experience per person. This arises from the monopoly that was granted to the two firms currently managing mountain climbing activities in Rwenzori; namely, Rwenzori Trekking Services and Rwenzori Mountaineering Services.

Consequently, while Mountain Kilimanjaro and Kenya each attract in the region of 15,000 tourists annually, Rwenzori registers less than 2,000 mountaineers in a year. In a positive twist of events though, this monopoly is about to be broken. The Uganda Community Tourism Association (UCOTA), Uganda Wildlife Authority (UWA) and WWF have come together to establish a third trail through which the mountain can be hiked.

“This new trail is a give back to the people of Rwenzori,” says UCOTA Filed Officer Mr Felex Kamalha. “Proceeds from the new trail will be used to empower over 5,000 households living around Rwenzori Mountain.”

The WWF Program Manager Mr Richard Mwesigwa says that this project has been inspired by the need to make the community appreciate the importance of conserving the park. This is being achieved by making them direct beneficiaries of its Eco-tourism activities. These trails are also expected to increase business for communities living along roads that lead to their starting points. One such is Basongora coffee farmers and Kinyancu Crafts Women’s Association.

In the long run, these kinds of initiatives held curb poaching because it provides people with a safer and acceptable alternative to make a living. Having concluded with the feasibility study last year, the project which is going to cost roughly Shs1.2billion has already kicked off and is expected to be completed in six months (around August 2018).
Upon completion, it will feature most of the basic infrastructure needed in mountaineering such as huts, ladders, boardwalks etc.

Mr Kamalha further observes that the new trail will have two entrances; one at Kinampanika, entering Nyacigumba and the second entrance will be at Kichwamba, just past Hima cement factory.

Comparisons with other trails of Rwenzori
1. Compared to the central circuit trail and Kilembe trail, the gradient of the new
trail will be relatively gentle and easier to maneuver.

2. Clients who will hike through the new trail are free to pay for only the days they intend to stay in the mountains. It will be $130 (around Shs470,000) for full board per day.

3. The new trail is owned by UWA and anyone can go and tour them without having to book through a third-party agent. It will always be open.

4. Thirdly, the new trail will be flexible to the needs of clients. For instance, a tourist can camp while hiking as opposed to staying in huts because it is much cheaper.

5. A client will also be free to choose the number of support staff they wish to trek the mountain with.