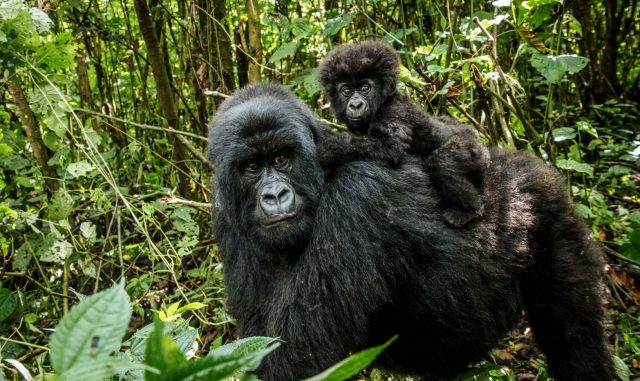 The year 2002; a scabies outbreak was sweeping through Bwindi Impenetrable Forest, a world heritage park enriched with over half of the world’s only remaining 880 mountain gorillas.

This is one of the most important biodiversity places on earth and yet all its
residents were being threatened by a deadly infection. The itchy infection was traced to an infected dog belonging to a farmer living in Buhoma, one of the villages that surround the park.

Like a melanin virus, it was eating up the skins of gorillas. This wasn’t the first time it was sucking the life out of these gentle giants though. In 1996, the disease which mainly manifests in form of a rash had befallen the park—infecting 16 gorillas and sentencing an infant male to death.

This prompted the birth of Conservation through Public Health (CTPH), a non- profit initiative that has since been at the forefront of gorilla conservation in Uganda.

The works of this Non-Governmental Organization (NGO) which is permanently based in Buhoma is largely centred at enabling humans, wildlife and livestock coexist through improving their primary healthcare.

The mission is simple: people shouldn’t pass over their diseases to animals and vice-versa.

In a bid to find out how their integrated wildlife conservation and community public health interventions saved the 2002 crisis from turning into a catastrophe and how they have kept the park on its feet, Wild Kanda decided to tag along to witness as the vets went about their fieldwork recently.

It all starts with collecting samples
Just like in human diagnosis, the tools/ excretions are vital in infection testing.

So here we were slithering through the chilly dews of Bwindi in the wee hours of the morning to collect samples from Rushegura. No, not Rushegura the close friend of fallen Congo Dictator, Mobutu Seseko. I am talking about a habituated gorilla family comprising of 15 members who are resident in Buhoma, one of the wings of the park.

Why? “There is no better way to tell the state of their health than by screening what had gone through their stomachs,” answered Mr Stephen Rubanga, one of three co-founders of CTPH.

Mr Rubanga is a senior laboratory technician who has been working to improve wildlife health for over 10 years. It probably doesn’t sound like a dream job, but to Rubanga it’s a pleasant way of life.

Judging by the passion with which he talks about poop of the gigantic herbivores: Nothing else gives the 50-year-old greater satisfaction than enduring the impossible in the name of ensuring their health is terrific. He is attached to them at an emotional level.

So here we were deep in the forest.
Armed with lab equipment and warm gear, our four-man team as led by Gladys Kalema, Executive Director of CTPH braved a 15-minute walk into the park through intertwined twigs.

We were hunting for the nest where the Rushegura’s had spent the night. Gorillas just like chimpanzees don’t sleep in the same nest more than once. This left us guessing where the nest could be. It felt like we were in the middle of some treasure hunt documentary.

Our biggest lead was their footprints, as stamped on the fairly marshy floor. The game rangers of Bwindi know their way around here. They led us on an exciting expedition of adventure and learning.

You will be looking for mountain gorillas but other residents of the forest will
blow you away.
The utter pristine state of the forest was impressive too. It hosts trees as old as
time, most with heights that rival that of telecommunication transmission masts.
We are talking, over 16ft high.

The hike was exciting. The forest kept unveiling one wonder after another. The most refreshing of which, according to me were crystal clear rivers. Makes you want to take a dip after a sweaty hike. But this water is extremely cold.

The darkness inside the forest was in its own category. The canopies sheltering the mountainous park were overlapping each too closely to allow much light filter through to the floor of the forest. It is the true definition of impenetrable.

On the whole, the most exciting part of the adventure was walking off beaten
paths, something gorilla tracking expeditions don’t offer. It granted us the pleasure of encountering endemic butterfly species like Papilio leucotaenia and Charaxes fournierae. Both tend to shy away from main routes.

In all we did though, our eyes paid critical attention to every detail in the forest. This was fueled by the fear of stepping on possible creatures with skins designed for perfect camouflage; like snakes.

It is through this extreme caution that we were able to notice the nest before long. It wasn’t in the trees as I was expecting. It was a ground nest, laid in a shrubby zone free of thorny foliage.

According to Kalema, gorillas prefer to lounge in the ground rather than trees due to their enormous body weight. Adjacent to the nest was fresh dung. To gauge the particular age of the gorilla which had slept in each depression, lab rulers came in handy.

The largest drop – as expected – was that of the silverback, measuring seven meters. With guidance from Kalema, we dug into the dung of each gorilla using spatulas to scoop samples.

We would then put them into small test tubes bearing their names. It came as a big surprise though that their scent wasn’t as devastating as the human’s equal. It’s until then that we realized Rubanga’s job wasn’t as disgusting after all.

In as much as there was no trace of blood on the dung–to arouse suspicions about their health, their droppings were to later be taken to the laboratory for further analysis.
Primarily, we were to screen the 15 samples collected to rule out any possibility of liver flukes, tape worms and generally parasites.

Face to face with the gorillas
Better still, we were to catch up with the gorillas to physically observe their state. It was captivating watching these creatures most of which weigh over 200 kilograms jump from one branch to another with so much ease.

They were having a heavy leafy feast to start the day. They had formed a ring atop
the canopy. In the middle of this ring were the young ones. Like human kids, the gorilla juveniles routed most of their energies to playing hide and seek as opposed to eating.

The relaxation of the adult gorillas and the playful manner of their young ones only pointed to one thing: they were healthy and life was good. But we weren’t done yet.

The following day we visited Kayonza, a government health center located on the same wing of the park. We needed to see how the community was fairing. Joining us at the facility, which is within a 40-minute drive East of Buhoma, was a team of four scientists from Massey University, New Zealand and Oxford Universities, UK.

The scientists had come to research on the link between lack of family planning and its impact on the park. Their names; Jenny, David, Jonah and Ben. Precisely, we wanted to see if there were any new medical cases that could be athreat to the community and gorillas.

As hoped, there was no such danger. The main cases reported were malaria-related. There were only 10 people who turned up for this exercise. When I asked why the low turn up, I was informed that most people don’t find it necessary to come over to the hospital when they can be attended to by Village Health Officers, a faction created by CTPH to treat diseases, especially those communicable to gorillas.

According to Mr. Innocent Turyasingura, the laboratory technician we found there, since the concept of village health team was developed two years back, the infant mortality rate has drop from 23 of every 1000 births to just about 3.

And now the village folks appreciate that the gorillas have brought good stuff to the community. The gorillas too seem to appreciate the relationship they now share with humans.

We can surely live together in health, and in harmony!